Pastafarianism: the cult of spaghetti 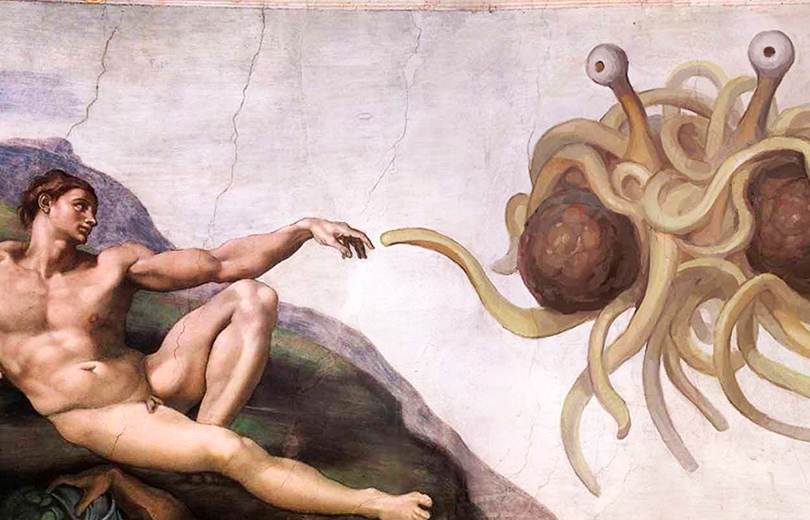 One day you might walk past someone dressed as a pirate with a colander on their head.That day you needn’t be surprised.

You’ll simply have run into one of the many Pastafarians of the world.

Pastafarians are members of an actual religion (which has already been recognised by some countries) that consider pasta as something that is more than just delicious and healthy.

They consider pasta, or rather, the Flying Spaghetti Monster, the supreme being that created the world in just four days and rested for the following three.

Its believers were given moral rules after Captain Mosey received the 8 “condiments” (read: commandments) on Mount Salsa.
You might be wondering how and where this religion came to be.

In 2005, physicist Bobby Henderson declared his belief in a supernatural creator depicted as a clump of tangled spaghetti with two meatballs and eyes: The Flying Spaghetti Monster.

This was his way of protesting against the Kansas State Board of Education and its decision to add
creationism as an alternative to evolutionism to its science curriculum.

In very little time, this pleasure-loving church has expanded and organised itself to the point that its entity
and rights are now being recognised by many countries.

Some have also managed to have a photo of themselves with a colander on their head approved for their ID. If you’re thinking about redeeming yourself and dedicating your lives to the cult of
spaghetti, just know that Pastafarians believe that pirates are saints and must be emulated
as such.

They fight for humanity every day as they wage war against global warming.

The promise for those that behave in life is a Heaven with fresh beer volcanoes and spaghetti
for all.

I think it’s time to you reach your own conclusions…!
R-amen!